It wasn’t as if Shar hadn’t been prepared for his arrival this time. The minute she saw him lumbering across the parking lot, she’d already had the menu in hand and had waved the antsy, little hostess away. He’d sit in the same spot, as ever, a booth overlooking the street, where he could watch the passersby and rot there. Shar didn’t even really want to know what was going through that worm-riddled brain of his, what he could possibly be thinking of when he looked at the people going by on the street.

Did they actually think, she wondered. Did they have the capacity to exhibit any sort of intelligence besides habit and routine? The fact that he came here on the same day, at lunchtime, once a year, must be, at the very least, somewhat significant.

“One day, he’s gonna eat Kevin. He hates Kevin,” the hostess muttered to Shar just before she skittered off to seat a family.

Shar grinned at the thought of it. Kevin was the afternoon bartender, and nobody liked Kevin. Kevin, with his yellow-tipped faux hawk, tribal tattoos, and manicured eyebrows. He’d bragged about having slept with every other employee in the place, happily married district manager included. Flat-out liar, Kevin. Kevin, who thought bringing their yearly customer a complimentary zombie cocktail would be Such A Funny Joke.

Their customer had entered the place. With menu in hand, Shar made a motion for him to move ahead of her to the booth. She used to speak to the guy, but since he was never particularly interested in making small talk, she kept her lead-in quiet. He seemed to like the silence anyway. As they walked to his usual table, a number of patrons, catching sight (or a whiff) of him, screamed bloody murder, grabbed their belongings, and promptly scattered. A few still lingered, however, as they always had, either too drunk to realize what was happening or morbidly fascinated that such a creature could, quite possibly, exist, never mind attend a restaurant like a civilized human being.

He plonked down into the booth seat and shuffled-slid towards the window. Shar handed him a menu, which he sniffed and set down on the table in front of him. He pointed at something familiar on the menu, something Shar had already known. She gave him a tight smile and nodded. He grunted at her in turn, tried to return the smile with one of his own. It came out a little lopsided and split another furrow in his ashy skin. A maggot wriggled its way through the crack near his mouth, and Shar, ever the professional, snatched up a napkin from the table and deftly caught the nasty little critter before it could plop onto the tabletop.

He sighed, a deep, rattling sound from his chest, and looked out the window. A part of the routine.

It was the colors going by, perhaps. The sounds of the Old Life.

Shar came back twenty minutes later with his meal. She set the cool plate carefully in front of him. Then she took his napkin and tucked it in his shirtfront, shooting him a warning look while she worked. He simply watched her with his cloudy eyes, groaning softly as he did.

“There. Enjoy, okay?…Man, what am I saying. You always do,” she said with a smile.

He looked down at his plate. The fillet was perfectly moist and red. No trimmings. No frills. Just as he always had. Blood pooled around the edges of the meat. He dipped a shredded finger into the blood, held it up to his nose, and sniffed. Then he glanced up at Shar, who never could help but watch him take that first bite.

Shar glanced over her shoulder, looking towards the bar. Kevin was showing off his bottle-juggling act to a group of California blondes, who watched on, enrapt at his ridiculous display. A bottle slipped from his grasp and smashed on the concrete floor.

Shar laughed softly, turning back to her customer. 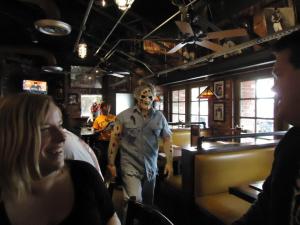