So I’ve this friend who can’t stand Harrison Ford.

Excuse me while mind is promptly blown to bits.

The man, now in his 70’s, is still the epitome of a late 20th century cinema icon, yet my friend can’t stand him. According to friend, Ford has no presence, no charisma, when interviewed. My answer: whatever (he doesn’t like interviews anyway, but I think that makes him even more likable, even relatable), but, if that’s what you see, dude, does he really need it?

My friend stood by his claim, adding that Ford doesn’t give any life to his characters, that his characters aren’t particularly varied from Harrison Ford. In other words, each character is simply Harrison Ford in costume. To my friend, I ask, is Ford, though, a genuine character actor? To me, I don’t think so. The man can deliver lines like no other, however; his timing, impeccable.  I could further argue that the leading men around his age are/were often cast in such roles because the roles written for them were often akin to Marlboro ads: they were often all-American tough guy cowboys who did what they had to do and didn’t give a shit about the obstacles in their way. They were simply Hollywood-crafted heroes men admired and women swooned over. Ford’s characters, however, have been varied enough that Ford himself hasn’t been constantly typecast as the singularly minded tough guy dealing with the catastrophe of the day (those were his fun roles for awhile). He may not fully immerse himself in some sort of caricature like some notables are wont to do, as is their specialty (see Johnny Depp for details), but hell, the man has presence. He is Generation X’s representation of classic Hollywood. He is our Humphrey Bogart.

To my friend, I say, don’t deny it, sugarpants — You so wanted to be him…or at least one of his characters.

Recently, the man in my life posed the question that Gen. X guys frequently ask their Gen. X. ladyfriends. His inquiry was somewhat in response to the sight of this in a certain trailer for a certain movie coming out in December that had popped up in all its retrolicious glory:

(Admit it…You got chills, too.)

His question is the very reason why I’m really posting this entry. I want to break things down for him, for any of the other Gen. X dudes who wonder if their ladyfriends are wholly smitten with some of the more notable characters the Ford portrayed and if they’d run off with any of them if they were able to actually do so…

Han Solo: A smuggler who’d initially unwillingly become a member of the Rebel Alliance against the Empire. Frankly, he’s a bit of a smirky smartass, and one should keep in mind that he never wanted to get involved with the rescue of Princess Leia from the get-go. He just agreed to help because he had a debt to pay off to a giant slug. Now I realize everyone gets into the whole onscreen sexual tension thing, but there were times when I felt just like Leia…

Han and Leia finally became the intergalactic “It” couple, and I couldn’t ever forget that Han’s response to Leia’s desperate, tragic “I love you,” just before he was frozen in carbonite and sent to the slug, was this bullshit…

Indiana Jones: My favorite of his characters, mainly because he’s a badass of an archaeology professor…

Does that mean I’d drop everything and run off with the guy? Well, honestly, the man is what I’d call the classic Disappearing Act, leaving his ladyloves behind in pursuit of “fortune and glory,” so the more I think about Dr. Jones, the more I think I’ll pass…

Richard Kimble: Are you kidding? The man is on the run from the FBI, intent on finding the one-armed man who killed his wife. I don’t think the guy’s ready to move on, do you? 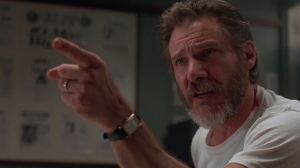 (Even YOU can’t stop me, Oscar winner Tommy Lee Jones.)

President James Marshall: He’s every bit of a heroic Presidential archetype as only Hollywood could possibly imagine. He’s good-looking, he’s tough, he’s got a family, and fuck you, Russian Gary Oldman, for taking his plane because…yeah… ‘MURICA.

Pass. He’s married, and I wouldn’t want that kind of shit happening to my family anyway.

Rick Deckard: He has to kill androids/Replicants for a living because they’re all going berzerk, but I don’t blame them. They were given a thoroughly cruddy deal: A lifespan for four years as a slave. Anyway, Deckard isn’t particularly kind to his new Replicant ladylove (who has her waist nipped in as if she has no lower ribs, which…well…no thank you)…and he says early on in an annoying voice over bit that his ex-wife used to call him “sushi,” which makes me wonder just how cold and lifeless he is…as if he’s really just a Replicant himself.

Deckard can stick with his android-love. Any guy more interested in machines, toys, gets a “no” from me.

Linus Larrabee: It’s no coincidence Ford was cast in the remake of Sabrina as Linus, a role previously played by Bogart. Linus is a stuffy, tight-assed corporate type who rediscovers the fun things in life after falling in love with the family chauffeur’s shy free-spirit of a daughter. Now here’s what I like about Linus…He’d been the one who’d actually noticed the oft-invisible Sabrina who’d been stupidly pining over his loser playboy of a brother, David, and he’d later been the one who was fully able and willing to change, for the better, to be with her. I could go for someone like Linus…Well…if I was a Julia Ormond-type, sure.

John Book: A cop who’s protecting an Amish kid who’d witnessed a murder committed by some Very Bad Cops, including Roger Murtaugh…I mean, Danny Glover cop (back then, he was always a cop, so it’s all so very confusing). He falls in love with the kid’s mom, which is sweet, but the trouble is…he’s not Amish, so their love is so forbidden and stuff like that. Maybe I could go for a John Book, but I think he’d rather be Amish, and I’m not ready for that sort of life-changing commitment…so upon further thought…ehh…pass.

(Later, the Amish girl goes on to be a Top Gun trainer and runs off with a Scientologist…)

Jack Trainer: I love the hell out of Working Girl, and I love the fact that Ford is just there as the love interest, and arguably the secondary source of conflict, rather than the starring role. That said, however, I am not about to go all Tess McGill and be quick to fall in love with Jack. The guy still exhibited a smidge of that old-school chauvinism in that, once Tess’ real role in the office was revealed to him, he wasn’t quite ready to accept that a secretary — oh, such a silly, little secretary — would be the source of a brilliant idea that could possibly garner a worthwhile merger between companies, one that could benefit both financially in the long run. In the end, he does, of course, but it’s that momentary doubt that gave me doubts about a love-life involving a Jack Trainer.

(Still, he can pull off the awkward fruity-cocktail-sipping thing pretty well.)

Norman Spencer: First of all, no one should hook up with a character named Norman.

Secondly, if one were to be his (stunning Michelle Pfeiffer) wife, Claire, she would have to drop her career aspirations as a cellist in order to cater to his absurdly huge doctor-ego. Then when their daughter goes off to college, Norman’s wife gets to be all alone in their house where some dead broad keeps scaring the shit out of her. Of course, being the wife of Dr. Spencer also requires the woman in question to be a victim of gaslighting to the point of possession because that’s just how bad it is at home.

And then, to top it all off, Dr. Spencer pulls this shit… 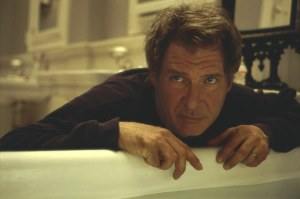 (Once dastardly deeds have been exposed, paralyze the gaslit wife and then drown her, of course!)

A final thought: To the lovely man, in all honesty, I’m not all that ready to run off with fictional characters to begin with, even if they are played by the Ford.

13 thoughts on “The Ford Factor”