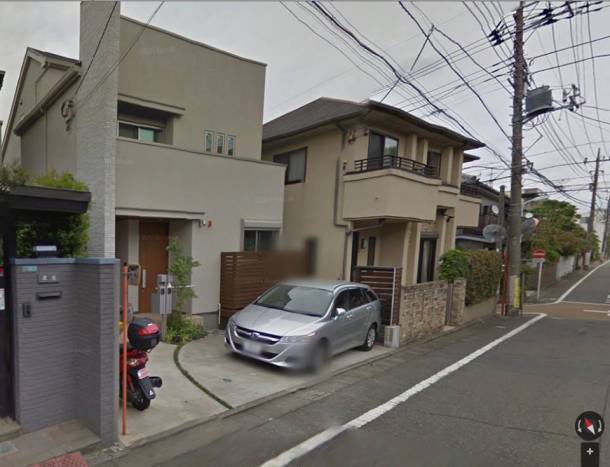 (The old house off Meguro-dori, currently revamped/updated. I don’t miss it much)
Some of my students wrote on a generic topic last week for their final timed essay:
Describe a moment in your life when you felt as if you were a “stranger in a strange land.”
I know. Somewhat akin to a WordPress prompt. Bland. Meh. It’s not as if we’ve much choice in topic inventiveness though as the timed essay is designed to be banal. Quantity over quality, as ever. And, naturally, most of the responses were of the “first-day-of-college” variety. The most interesting few among them took the term ‘strange land’ to mean just that — a STRANGE land, completely out of one’s sense of normalcy and comfort, where ‘culture shock’ can make one physically ill.
So while the topic itself wasn’t much of a prompt for me, the few who’d written on what I immediately, weirdly identified with, did inspire me to write today.
Every term, when my students learn that I’d once lived in Tokyo, they ask me what I’d thought of it, what was it “like,” that kind of thing. Every term, I tell them the same thing (which may change due to current tastes in film):
There’s this one scene in the American version of The Grudge (Ju-on), where Clea DuVall’s character’s in a Tokyo supermarket, browsing shelves of dry goods, and she can’t decide what to buy because she can’t read anything on the packets and labels. She just starts opening up all the containers and boxes and then peering and sniffing at whatever’s inside. It’s not the most memorable scene, of course, because The Grudge is meant to be just a horror movie, but to me, the remake is a film about foreigners suddenly thrust into a sense of extreme culture shock, a place where nothing is familiar at all, and even if one’s adept at getting around, there will always be that feeling of being the Other, the one who’s overtly Different.

(She correctly guesses ramen.)
I’d lived in countries that were different, places where I’d felt Different, but it was nothing like the jolting otherworldliness of living in a place where I couldn’t read the street and shop signs, never mind the labels, at all; a place that had ancient rituals and traditions interwoven with Westernized marketing and bizarre cross-cultural capitalist mania; a place where I could get whatever I wanted if only I could discern one street, never mind one “-chome,” from another; a place where people and more people, noises and neon, stink and beauty were on 24-hour display. My husband had chosen this place, and I had to make the most of it.
During my first day there, I was so overwhelmed by sensory chaos. The husband took me around our area, showing me the creature-comforts mere blocks from where we lived. None of it was a “comfort” though in that surreal landscape. For example, there was a 7-Eleven down one end of the street, a “konbini” (convenience store) that had cold udon and pickled plums during the summer; hot, alien ingredients for oden (a winter soup made up of fishcake, daikon radish, yam cake/”konnyaku,” and boiled egg) simmering in metal containers near the cash register and always onigiri (seaweed wrapped rice balls with a savory filling of some sort in the center) lining a couple of shelves in the refrigerated foods section. 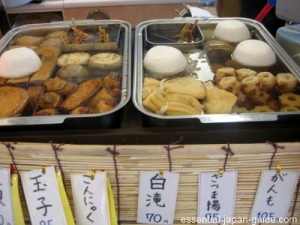 (Onigiri. Whatever was in them was often a surprise for me since I couldn’t read the labels.)
Down the opposite end of the road was a Denny’s…

…not a Denny’s I was remotely familiar with — I mean,  I couldn’t get a correct version of Moons Over My Hammy — but it was certainly a Japanese version of Denny’s complete with stuff like tonkatsu, curry dishes, and cream Animatsu “sundaes” consisting of green tea ice cream, red bean paste, and balls of mochi. Oh, and the servers were all abnormally cheerful.
Our nearest train station was in Jiyugaoka, made popular for its shopping area famous for boutiques and strange attempts at Euro-chic. 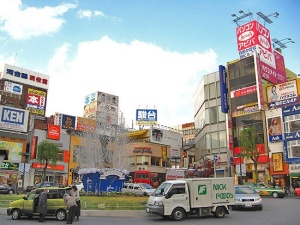 (Across from the closest station/”eki”, a mass of shops, cafes, pachinko parlors, French patisseries, and bars)
I was unable to do much on my own during the first couple of days since I was paralyzed with all sorts of emotions — fear, trepidation, excitement, panic, fury, awe, sadness, even more fear…It didn’t help that I’d not lived in such a monstrously huge city for a number of years. I’d forgotten what it was like to have everything right there and so absurdly expensive. I was also heavy with jet lag, something I was familiar with, but I’d never gotten used to it at all. I just slept for a couple of days after my “welcome” tour from my husband, who was always ready to go-go-go, always wanting more. How I hated his energy.
On day four, I was startled out of my foggy haze by a man’s chirrupy voice over a loudspeaker, singing that “yakiimo” was “totemo oishii OISHII,” just outside our house. I’d hear this song playing nearly every day during the colder months. There were these little trucks and vans traveling around the area, their connected loudspeakers belting out singsongy, squeaky-voiced tunes (much like our ice cream trucks), advertising various services, everything from laundry to — as I found out later — yakiimo (stone-cooked sweet potatoes).

(Yakiimo truck where the loudspeaker song promised how buttery-“oishii”/tasty-good their potatoes were…and yeah, they totally were.)
That sound — that perpetually annoying, tinkle-pinkle of a tune — was, inexplicably, the motivation I needed to do something, to make the best of a situation I didn’t want to be in in the first place. My husband had volunteered us to live there for a few years, thousands of miles from family and friends, to a place where we would constantly feel Different no matter what. That sense of “Different” though wasn’t going to be an obstacle for me; I wouldn’t let it. While I never really learned the language the way I’d intended, I still managed to get out and about, and I made a great friend there who helped me feel a little less “Different” until I almost felt at home.
Almost, but not quite.
After all, I’d never lived in a place where I couldn’t read much of anything.
Disclaimer: I cannot take credit for the photos. Aside from the home pic, the photos here were from Denny’s Japan and various tourist sites and blogs about Toyko, especially Jiyugaoka, courtesy of others who’d been there. Due to my lack of a camera at the time, among other inconveniences and issues I have addressed elsewhere on this blog, I have no pictures kept from Japan.