Allow me some raw honesty for a moment (as if I wasn’t ever honest here to begin with): I absolutely abhor preachy, in-your-face health nuts. Be healthy, fine, sure, yes. I get that. I’d like to at any rate, but I refuse to kowtow to voices of total batshittery. I’ve some acquaintances who are on their way to a better tomorrow with their strenuous workout regimen and sparkly Good Nutrition habits, coupled with their occasional announcements of their dress/pants sizes whittling down to enviable proportions. I’ve done it myself, and I’ve told myself I’d do it again this year…sometime…maybe…It wasn’t a resolution, a promise marked in stone. Sorry, no. Not when there’s chocolate cake and beer to be had today and nutrient-rich, cruciferous veg (ugh) to have tomorrow (or the day after tomorrow or day after that…etc…).

I have NO patience for the fringe lunatics though, the ones who are positively rabid about “health, health, health” and avoiding chemicals in food altogether (absurd and downright impossible because All The Things consist of chemicals); who get downright frothy-hysterical over GMOs (kindly do further research); who insist everyone subsist on some sort of of paleo-glutenless-vegan-chi-raw-macrobiotic-Atkins-prayer based, tasteless water-diet; who have such sneering contemptuousness about those who buy prepackaged meals, like a generic Cup o’ Noodles, and/or fast food.

Those nutcases who have the loudest voices, however, are the worst, imho.

Take this broad, for example… 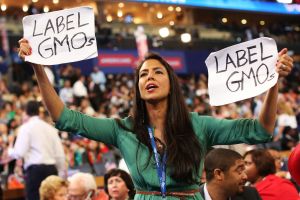 This is Vani Hari, also known as “Food Babe.” (She doesn’t like GMOs either.)

Food Babe — equipped with a giant army of clueless minions — is on a mission to rid the world of “toxins” (I just love fear rhetoric) in our food supply and to make sure food companies change their nefarious ways. It sounds like a noble cause, doesn’t it? After all, a “toxin” is a “poison,” and according to Food Babe, our food is just filled with them because our food packaging contains words most of us can’t understand. She cleverly picks and chooses words and phrases she’s done a little surface “research” on to shock her audience into joining her on her mission, words like “beaver anal glands,” “coal tar,” and yoga mat “azodicarbonamide.” (Because ewww, amirite?)

Let’s get something straight…Food Babe’s intent is not all about the idea of being responsible with our food choices, which is fine, whatever; rather, she is assisting in perpetuating a culture of fearmongering, and what’s even more horrid about this broad, this “babe,” is that she is NOT AN EXPERT on ANYTHING related to chemistry or biology (or even food journalism), but she poses as one (she has a degree in computer science for shit’s sake). She’s a fraud, in other words, a fraud in a pretty, marketable package. Not only that, she uses her fearmongering skills to sell her own health products…products that happen to contain some of the very ingredients she claims are dangerous. 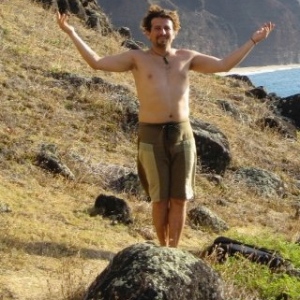 This is David Avocado Wolfe. (I KNOW! “Avocado.”)

Mr. Avocado Wolfe, he of the kinky-brah hair, is the egocentric, self-professed “rock star and Indiana Jones of the superfoods and longevity universe,” who coined such (space cadet) notions like “chocolate is an octave of sun energy,” mushroom spores can “levitate off the planet because they’re surrounded by a shell of ormus, which actually is trying to get to the center of the sun” (and that they might even be alien) and “gravity is not intrinsic to matter.” I shit you not. Youtube his name for fun and see what happens.

There’s this other chick…

This is Zen Honeycutt of Moms Across America.

The Zen Honeycutt is quite masterful in that she uses the most powerful of fear-inducing rhetorical devices — an appeal to motherhood and children. Like Food Babe and Avocado Head, she has no scientific credibility whatsoever. She’s just armed with a bit of good ol’ personal anecdotal “evidence” — she claims her son’s autism symptoms “improved greatly by going GMO-free and organic” without having any scientific testing conducted to confirm it. Honeycutt is also notorious for shunning scientific response to any of her claims, insisting anyone who proves her incorrect is a Monsanto shill.

There’s this one broad, too, who wrote this book…

There’s mama-crazy and there’s mama-pseudoscience-reliant-dangerous-crazy. Notorious anti-vaxxer Modern Alternative Mama is convinced that necessities to a civilized, healthy society — you know, things like bathing, teeth-brushing, and putting on sunscreen — aren’t appropriate for children, really. Oh, yeah, and milk pasteurization is bad because it kills off good bacteria and makes bad bacteria thrive, mmm’kay? (Pretend like you know nothing about the fact that pasteurization prevents bacteria that causes such horrors as E coli, Salmonella, tuberculosis, scarlet fever, typhoid fever, and so on)

Finally, there are the health nuts who aren’t particularly dangerous, but they’re certainly worth a mention due to their sheer insanity and inanity, their hippie-crunchy elitism…and I can’t fucking stand them…

What else is there to say about this vacuous dip? Her ding-a-ling site, GOOP, contains some fantastic bits of advice and general info-dumps for one’s health like…

4. Lots and LOTS of Detox. Because detoxing gets rid of “toxins” from your body. (Why bother having liver and kidneys naturally doing that anyway?)

Oh, and here’s Amanda Chantal Bacon, CEO/owner of Moon Juice, and the reason why I’m writing this.

I love the shit out of trendy, hippie-dippy Amanda Chantal Bacon ever since she (weirdly) popped into my Facebook feed not too long ago with this little tidbit:

I don’t know if it was the pretentious-airy attitude she projected in her status regarding educating the police officer who’d stopped her for her Himalayan-salt-vaping (or whatever the hell she was doing)… or the fact she’d taken a hand selfie holding that ridiculous inhaler thing while attempting to steer her goddamned BMW.

Naturally, I had to look her up, and I found the notorious Elle interview with her about what she eats on a daily basis.

First reaction: What in the ever-loving-crazypants-expensive-shit is she consuming??? Silver needle tea? Brain Dust? Activated cashews? Cultured sea vegetables? Sprouted brown rice protein? What…What does any of this mean?

Second reaction: What is everyone else saying? Am I crazy for thinking this is crazy?

Nope, and the responses were glorious. In fact, I leave this entry with my favorite spoof of the Elle interview performed by Jarrett Sleeper:

Some sources worth checking out…