WARNING: There may be spoilers ahead.

I’ve a friend at work who has sort-of recently revealed that she is also a writer, and I’m seriously thrilled to have learned this about her. Not just a writer of any sort, she’s interested in horror as well, and I marvel that she’s working on two ideas at once. Heck, I’m in awe of horror writers in general, really. Horror is my favorite genre, and for some odd reason, I’m awful at writing it mainly because I can never figure out the way through. Good horror, especially horror-in-short, often involves careful trickery upon the reader (or viewer or listener, whathaveyou). My friend knows this, too, and is toying with the idea of a supernatural story told in a couple of perspectives, which is interesting because, if done well, using more than one perspective, an author can deceive at will.

Like my friend, I am going to attempt to write a horror work over the summer break. However, unlike my friend, my attempt will to focus solely on human horror rather than the supernatural. A simple story about a sociopathic couple who are chaos-makers for the purpose of their own research.  What won’t be so simple about it is that there is no mythos to fall back on, no folklore, nothing fantastic. These two are, in a manner of speaking, human monsters who are manipulative and cunning…and I have to learn to think as they do. It’s quite difficult, obviously for a person with a conscience.

Over the past year, my research has been focused solely on the psychology of the human condition, primarily what makes us moral versus what makes some of us embrace total apathy. Lots of Philip Zimbardo, Robert Hare, Martha Stout readings. I took a bit of a break from my actual research, however, due to a heavy amount of grading and the work-related nonsense that comes with it. Last week was especially grueling because it was also the last week of the term.  Even still, I’ve managed to squeeze in some time between papers to entertain myself more or less (I’d go mad otherwise), and oddly enough, I’ve noticed a theme during the past weeks or so that coincides with my research, the theme of savagery. I’d go so far to say that my fictional human monsters are savages in that they’re cruel with their games, but they’re not particularly sadistic. In other words, they’re unable to feasibly “enjoy” what hell they bring upon their community.

Story in a nutshell: On-the-road, young punk band gets a last minute gig at a white supremacist club. After their set, one of the band members, on an in-and-out mission to recover a forgotten cell phone, inadvertently witnesses the aftermath of a brutal murder in the club’s green room. He, another witness, and his band mates then find themselves trapped there as the club owner/leader and his men plot the kids’ demise.

Green Room is a film primarily about savagery, whether conceived out of upbringing and brainwashing or simply created by dire circumstances. The neo-nazi antagonists have been raised for a cause, and that cause’s roots were borne out of savagery. The violence revealed from the initial discovery of the murder escalates into a night of sheer torment for the band members. The neo-nazis’ leader, Darcy — a unnervingly calm, grandfatherly type (a chilling performance by Patrick Stewart of all people) — uses psychological savagery to manipulate his followers into doing his nasty bidding. There may be fallout, but it’s all in the name of keeping the “brotherhood” together. Brute savagery then becomes a necessity for both the neo-nazis, so as to contain their dirty secret, and the band members who’re being held against their will and trying to survive the inevitable. It’s a beast of a film; its violence, shattering. 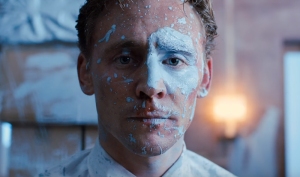 Story in a nutshell: High-Rise is predominantly all about its setting — a retro-futurist, virtually self-sustaining tower block in an alternate 1970s Britain. The tower block’s levels represent the social class structure of its denizens: the penthouse suite complete with elaborate rooftop garden for its architect, Anthony Royal (Jeremy Irons) and his sneering, horsey-loving wife, Ann (Keeley Hawes); the upper-levels where the debauched wealthy reside; the mid levels for the general middle class; and the lower levels for the blue collar workers.

Our protagonist Dr. Robert Laing (Tom Hiddleston) has only been living on the middle level for a short while, and it isn’t long before he’s seduced by certain neighbors (and their lifestyles) on each level — Royal, naturally; partying single-mother Charlotte Melville (Sienna Miller) who lives just above Laing’s flat; and the cramped Wilders on the lower level — Richard (Luke Evans), a documentarian determined to uncover the inequalities of the tower block and Helen (Elizabeth Moss), Richard’s very pregnant, harried wife. As the tower begins to crumble, so do all of its residents, literally locked in chaotic, debauched, violent surroundings of their own making.

High-Rise‘s evident metaphor on societal collapse, where the phrase “dog-eat-dog” becomes all too true, is ripe/rotten with representational psychological and physical savagery.  Even the subtler scenes are infused with it. For example, Laing’s arrival at a party on the upper level has the viewer as uncomfortable as he appears, a wilting cigarette between his lips and cheap bottle of wine in hand, surrounded by the wealthier residents of the building dressed in 18th century court regalia. They mock him, poking fun at his suit and tie ensemble, at his bourgeois complacency.

Once the electricity dies and the building groans its despair, a virtual tribal war begins when a chaotic children’s birthday party turns into an act of rebellion in the upper level’s swimming pool. The garbage disposal overflows onto the hall floors, ravaged bodies are left in the lobby to rot, house pets are cooked on makeshift grills, and human lives, aside from that of the children’s, become practically worthless, even amongst the privileged. The savagery present is so all-compassing, it leaves the viewer feeling hollow.

Then there were the TV shows:

Calvin Bunker, waiting so patiently on the front steps.

The final season of the pulp fiction show seems to be centering around the hunt for a satanic serial killer and the end game of Kai Proctor (now, somehow, Mayor Proctor) and his criminal kingdom. Much of Banshee contains scenes of gruesome physical savagery because it is a show about the grim underbelly of a small town and its secretive residents.

Season four also goes more in-depth with the Bunker brothers, Kurt (Tom Pelphrey) and Calvin (Chris Coy), who’d grown up within the neo-nazi brotherhood (I’m sensing a connection, yeah). Kurt long left the collective and has since become a town deputy, attempting to atone for his transgressions. Calvin, however, with his crumbling cover of suburban respectability, is still deeply involved in the trenches of the brotherhood who are in business with Proctor’s “side” ventures. Since he was first introduced in the previous season, Calvin has been seething at the bit to gain control. Episode five finally gives him his shot but not before a wrenching act of savagery to prove the brotherhood is still behind Proctor’s drug trade, a vicious killing concocted  by Calvin’s fresh-out-of-prison father-in-law (and leader of the brotherhood), Randall Watts (a suitably nasty performance by Chance Kelly). Essentially, Calvin is forced to bloodily rip his best friend in half in a scene that managed to one-up a similar scene in Robert Harmon and Eric Red’s 1986 film The Hitcher (just pretend the remake didn’t even exist). That act of viciousness triggers the savage in Calvin, and the final moment of the episode has him stab his  father-in-law in the neck.

With only a couple of episodes left in the series, undoubtedly, Kurt and Calvin will have their showdown…and it will undoubtedly be brutal.

HBO’s fantastic otherworldly series of kingdom intrigue, Game of Thrones, based upon the novels by George R.R. Martin, is no stranger to moments of savagery, causing even the most hardened viewers to walk away. Its most recent episode last Sunday, the episode “Oathbreaker,” held a scene so horrendous in its savagery, even horror writer John Shirley has ceased watching the series. Those, like myself, who continue to watch understand that the world of Westeros was built out of savagery, and no one — I repeat, NO one — is safe from harm.

The controversial moment of savagery involved the psychopathic Ramsay Bolton (Iwan Rheon) — now Lord of House Bolton and of Winterfell not to mention Warden of the North — all because he first murdered his father and then, literally, fed his stepmother, Walda Bolton (Elizabeth Webster) and new baby brother to the dogs. Thankfully, the savagery of the scene was offscreen, but the sounds of it happening were quite loud and clear enough to induce nightmares.

I think I may need a little respite from the savagery, a reminder that such acts I’ve illustrated are only works of fiction and aren’t a part of the human condition whatsoever in that they’re brought about by monsters.

Maybe it’s time for something nice…like a Modern Family marathon…?