Not like it’s wholly relevant to this entry, but I don’t care…I’ve one of those cheap, squeaky stepper and resistance band-combo machines I put to use every day. Jobs that require so much sitting, as pleasurable as they may seem (am working hard on my script treatment), really jelly the muscles and petrify the joints. Overall, I feel much better whenever I work out, but I hate it when I’ve neglected myself to the point where I’m exhausted after only 15 minutes of strenuous activity. Still, must continue on. A couple of days ago, while pacing myself on my calf-killing machine, I caught Cherry 2000 on one of the movie channels. It’s a strange film. On its surface, it’s one of those cheesy Mad Max rip-offs that tended to pop up during the ’80s VHS rental craze. However, its ever so slight subversion of stereotypical gender roles was fun to see, especially since its fellow MM clones tended to have women play victims in need of rescue and/or women who were solely nurturers.

Essentially, Cherry 2000 had me thinking about other post-apocalyptic wasteland-set films, the Mad Max wannabes included of course (e.g., Battletruck, Exterminators of the Year 3000, Steel Dawn),  where the female characters were either love interests, sex objects and/or nurturers quite often shifted to the background, it being a tough guy’s survivalist world after all. Nothing wrong with that, really, but if one were to be feasibly realistic about it, would women really confine themselves into such narrow perimeters? Okay, it’s fantasy, I know, and, well, every so often, a “wasteland” film comes out with a refreshingly different kind of hero(ine)…

(NOTE: I’ve listed the lesser-known heroines, not the usual Katniss Everdeens or Resident Evil or even the Mad Max ladies we’re already so familiar with. These are the “forgotten” women after all, and they really shouldn’t be, even if their source material isn’t all that worthwhile. Also, keep in mind that, as ever, there may be spoilers ahead.)

Melanie Griffith (of all people!) plays Edith “E” Johnson, a badass tracker hired by a rich prat to help him find a duplicate model for his broken Cherry 2000 sexbot deep in the lawless wastelands known as The Zone. Granted, the message here is abundantly clear and more than a bit overdone: Authentic women make better lovers, yadda yadda. Well, duh. Nevertheless, E was awfully engaging to watch. 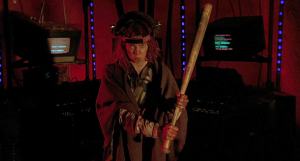 Stacey Travis plays Jill, a sculpture artist living in a ruined cityscape. She confines herself to her grungy apartment in order to focus on her work and stay away from the hell of the nuclear-ravaged outdoors where the air remains toxic. Initially, the story seems to revolve more on Jill’s scavenger boyfriend, Moses (played by Dylan McDermott). After a day of roaming the wasteland outside the city, Moses comes back with goods to barter and then brings Jill an unusual piece, a robotic head, to add to her current project. Little do they know that the piece is from a military cyborg, the Mark 13 model, its purpose to kill anything within its vicinity. The film then takes a significant dark turn when, inevitably, the robotic head activates, and the robot rebuilds itself out of parts Jill has amassed for her work. Jill then finds herself having to fight for her life all in the course of a brutal, bloody evening.

Let’s get it out of the way… like the critics and general public, I didn’t care much for Tank Girl. I realize it was meant to be as silly as its British cult comic origins. That said, it just didn’t make for a good film in that it was too over-the-top and dreadfully spliced together. Still, Lori Petty as Tank Girl seemed to have a ball playing the anti-corporate, wisecracking rebel surviving in a wasteland where water is the (quite literal) prime commodity. I still wonder what would have come of the film had Talalay had some semblance of actual creative control (not to mention Tank Girl‘s creators, Jamie Hewlett and Alan Martin) and the original actress set to play the lead, Emily Lloyd, had agreed to shave her head for the part. I also wonder what would it have become if it had been British-made/British-produced.

Rhona Mitra coolly portrays military operative Eden Sinclair who is sent with a small team of soldiers and scientists into the ruined Scottish highlands in order to find a cure for the Reaper virus, a plague that had, essentially, decimated Scotland’s population and is rapidly making its way into England. Doomsday wasn’t much of a box office draw, and I wonder if it was because it had so many ideas tossed into the mix to the point of absurdity. Personally, I thought it was a terrifically entertaining genre mashup, displaying an evident love of Mad Max, Escape from New York, 28 Days Later, and of all things medieval. Eden is a great protagonist, too. She can wield the shit out of a sword, beat an armored giant to a pulp, and maneuver the hell out of a Bentley Continental GT backwards into a road gang. (Bonus points for her cyborg eyeball camera.)

I’ve much admiration for Ashley Bell ever since her back-bending turn as the possessed farm girl in The Last Exorcism. In The Day, she plays Mary, one of a grungy group of young, post-apocalyptic survivors out searching for a safe haven stocked with supplies. Like a number of its genre counterparts, The Day‘s villains are a roving band of cannibals, and, in an interesting character twist, Mary turns out to be quite an ass-kicking asset for the group, even if some of them remain (somewhat rightly) dubious about her motives.

Olivia Thirlby plays Judge Anderson, the telepathic trainee partner to the notoriously stoic, by-the-book Judge Dredd (Karl Urban) in Mega City One, one of the walled, vast cityscapes housing the general populace on a nuclear war-ravaged earth. Anderson provides the pathos that Dredd lacks, but when push comes to shove, Anderson is more than ready to take part in a violent, epic showdown between the two Judges and the brutal gang that runs one of the city’s seedier skyscrapers, Peach Tree tower block.

Okay, so, I love Lena Headey as a baddie. In Dredd, with her trademark sneer and ice queen gaze, Headey plays the malicious, scarred Ma-Ma Madrigal, ex-prostitute turned drug lord (and addict of her own product, Slo-Mo) who rules over Peach Tree with her vicious associates and has quite an arsenal at her disposal. 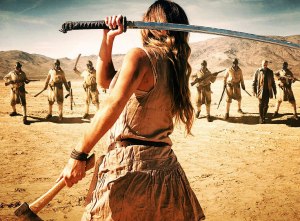 Hayley Lu Richardson plays Kendal, a teenager working to protect and keep a well up and running in a drought-ravaged world. Not only does she watch over the well, she also is caregiver to a couple of other survivors, one of whom is slowly dying. When a snake of a water baron and his gang attempt to take over the well, Kendal fights to protect what little she and her friends have left. While The Last Survivors’ overall pacing is sluggish and the script is as dry as the setting,  Richardson still makes for a brave, endearing heroine to root for in the wastelands.

Apple (Laurence Leboeuf) is a truly oddball gem of a character in Turbo Kid, a dedicated, deliberate homage to those Mad Max clones of the ’80s I’d mentioned earlier. Everything about the film, from its hammy villain to its buckets of cartoonish gore, is pitch perfect, and when I saw it, I suddenly had a hankering for a packet of Spree and a can of Big Red, my ’80s snack of choice (don’t judge). Anyway, Apple, probably the most out of place character in the wastelands with her wide-eyed chirpy eagerness, joins our hero, the Kid (Munro Chambers) in his fight against a lethal warlord (played by Michael Ironside, naturally) and his crew. In true ’80s sci-fi spin, Apple’s actual purpose is revealed, and in the end, she bravely sacrifices herself in order to save the Kid.

(Addendum: I’d really like to see some minority representation amongst the post-apocalyptic heroines. WTF is with central casting? Never mind the lack of female directors in the genre…I’ll save that for another entry…)

12 thoughts on “The Forgotten Women of the Wastelands II”