Because I was never an It Girl as I was always taking up the trend rather than being a trendsetter, I’m going to embrace the follower in me (since she refuses to die) and do the same as my sage, experienced contemporaries. The primary difference is, obviously, I’m a relative newcomer to the horror writing world, so what I say is solely based on the past couple of years rather than decades’ worth of experience. What I hope, however, is that I can help someone who is currently on the same path now as a newcomer. Therefore, specifically with them in mind, I’ve titled this piece Things I’ve Learned As a New Author…

How can you possibly have a creative life in the 21st century if you don’t have some sort of social media presence? I know for authors, it establishes a connection to others in the writing community. I owe another creative, someone I’ve known since I was a toddler, for my introduction to social media, and he always managed to get me to sign on whatever platform was the next big thing. I owe yet another creative, author Jeff Strand, whom I initially met on social media, my horror writing career path.

I don’t think I need to go into details about how social media is the cheapest form of marketing for your work, too, since that goes without saying. Another plus! You’ll also meet other authors, editors, cover designers, publishers, and READERS from all over the world. What could possibly be so wrong about that?

Well, we know perfectly well by now that social media has its problems. It’s not social media itself that’s the issue when it comes to those creative connections. When it’s used as a tool to do terrible things, obviously, it’s problematic. Be careful how you interact with others. Be professional too. You’re working after all. If you use social media as a free for all for yourself, hell, honeychild, it’s your profile. You may certainly do what you want, say what you want, project yourself as whatever you want. However, remember, someone, somewhere, is taking screenshots of some of the awful shit you may be posting. Your social media profiles should represent the best of you, not the worst of you. Keep that other stuff private.

Pay attention to them, learn from them, listen to them. There’s a story there, too. I guarantee it, and you won’t want to miss that. If I had closed myself off to advice, I would’ve never gone to KillerCon and met my publisher, which would’ve made my publishing journey a lot longer.

A convention is your chance to meet authors and publishers and talk to them one-on-one. I hate using the word “networking” because it sounds so cold and corporate. A writers’ conference is generally warm and inviting, and a good one will inspire and invigorate you. The smaller the convention, obviously, the more likely you’ll get to actually hang out with people you admire. If you’re an introvert like I am—I’m not going to lie—it will seem daunting at first, and the butterflies never really go away. That said, plenty of authors are introverts, too, feeling the exact same way you are. You know this though. We’re in a lonely profession where, sometimes, the only company around is living in our heads. I have this problem where I tend to make an ass of myself in front of people I admire, but now that I’ve seen them interacting with others, I’ve also seen that they have their own quirks and insecurities as well.

I won’t sugar coat it though. There are going to be moments where you’ll meet someone whose work you enjoy and admire, and that person will disappoint you when you meet him or her. It happened to me, but for every one of those particular authors who’s ignored you, there are several more who are as interested in you as you are with them. Stick with them. Your world will become so much more exciting with them in it. Trust me.

Never compare yourself to someone else. Their success has nothing to do with your own success. It really doesn’t. I realize envy is one of the greatest flaws of the human condition, but if you let it take control, it will cut a hole in you and fill it with acid. I know it’s hard to shake that curdling, awful feeling. Believe me, I do. I get a twinge of envy every so often, but the feeling subsides when I remind myself that this is not my path…

There’s a little mind trick I taught myself years ago back when I was an amateur performer. I always thought acting was a lot of fun. How often is it you get to pretend to be someone else in front of an audience and not get arrested for identity theft? Anyway, during my first few years here in central Florida, I was involved in a local improv group, and I did some community theater. It was a great way to creatively cut loose and meet some wonderful people who enjoyed what I did. At some point though, it grew difficult for me, and envy seemed to be the common culprit.

Subsequently, that became how I approach envy. Envy only enters the picture when we compare ourselves to others who are not like us. And when we want what they have, it often makes little to no sense because what they have isn’t necessarily what is right for us in the moment.

So when it comes to envy of other authors’ success, ask yourself if what they have is what’s actually right for you, too. More than likely…

A) it may not be your time just yet

If you are persistent and hardworking at your craft, your time will definitely come. It will. Just don’t let someone else’s success determine your own.

I said this once in a response to a post in a Facebook writing group, and I stand by it: When dealing with negative reviews, take what you can from them, and shrug off what you don’t. Your writing isn’t for everyone, and that’s perfectly fine. You know yourself, and you know your audience. That’s what matters.

Every author I’ve interacted with seems to have different ways in how they handle negative reviews. Some read them for critical content they think may help them. Some vent about them to their friends. Some binge eat everything in sight until they fall into a food coma. Some turn them into comedy gold. And so on and so on.

One piece of crucial advice they share in common though is they all agree that you should never directly respond to negative reviews and to the reviewers who write them.

For the most part, reviewers aren’t writing for you. They’re writing for other readers. When you insert yourself into it, you’re going to alienate reviewers AND the readers they’re writing for. They’re not going to want to read anything of yours again. That may sound ideal to you, but from what I’ve learned, writing communities are pretty small. The horror writing community in particular is smaller than one might think. Sooner or later, word will get around that you got ugly with a reviewer on a blog, on Goodreads, in a Facebook group…somewhere anyway… and your reputation will go down the toilet.

You will ALWAYS be asked what you’re working on next, so you should be working on something new, moving forward not backwards. As I write this, I’ve a set of Post-it notes ready to line my wall with scene revisions for my WIP (a seedy little thriller that’s been a fun, but long, chaotic ride), and I’ve another document open, the beginning of a short story that’s been torturing my psyche to get out. However, I find it hard to keep from worrying about the state of my published work, especially the most recent project and its potential readership. I confess I spend too much time honing in on a previous project and lose track of what I ought to be concentrating on. So I have to keep reminding myself that my debut novel, Reception, was a project that kept me from solely focusing on what was happening to my previous novel that was supposed to be my debut. A novel that is now in limbo, and I really don’t mind that it is because I’ve moved forward. In other words, current projects are the healthier distractions.

Again, forward not backwards, my friend. 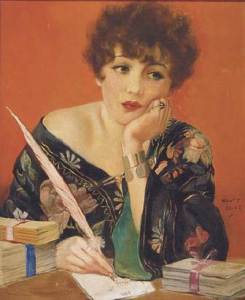