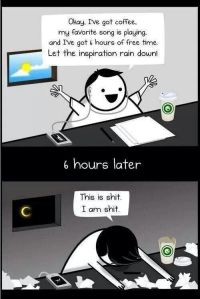 (comic courtesy of The Oatmeal…bloody brilliant)

Mission accomplished for NaNoWriMo. Well, okay, I’ve not written an entire first draft of a book, but I’ve written over 50,000 words of the second novel in my series. I’m really only halfway done with it, and it’s quite shitty so far. Hopefully, I’ll have a first draft completed by the end of December. Then there will be another draft and another…and so on…so it won’t be utter shit.

(Incidentally, I didn’t expect the novel to be a part of a “series”; it just turned out that way. I felt like I had to do something additional, add another story, go further with the characters, and it just kind of blew up from there.)

It’s not like novel writing is old hat to me at all. In truth, I have only started doing this because I have a story, and I can’t quite condense it down to a single sitting’s worth of reading. My father used to get incredibly aggravated with me because I could never give him a brief synopsis or summary of a movie I’d seen or a book I’d read. I’d just describe it in so much detail that it just drove him batty. In school, I could never summarize anything. As a result, when I teach summary writing in class, I actually do the process with my students not so that they can see HOW to do it, but so that I get practice with it, too, since I stink at it.

That said, the query writing process is always a pain for me because not only am I bad at summarizing my work and making it seem catchy, I am also terrible at advertising myself. I don’t think I am worth my weight, really. Over the holiday break, I will have to do my best to write a fantastic query letter than says bare minimum about me and plenty about the first novel but without seeming to.