Guilty fascination confession: I love watching bad characters succeed and then (dramatically) plummet. The pilot premise I am working on (more or less amidst the 120 or so papers every so often) is about ordinary evil people and their plotting/scheming evildoings but ordinary evil people who are forced to change for the better, which is a tricky feat because sociopaths and psychopaths are unable to emotionally evolve. The Sopranos, Breaking Bad, and House of Cards showed us this. Dexter‘s title protagonist seemed to want to change for appearance’s sake, and he was always fascinated by human behavior (I always thought his interest in humanity was much more clinical, even scientific). He grew intellectually and socially, but did he grow…emotionally? That’s still up for debate. He, like any psychopath, is wholly unable to love even though he desperately seemed to want to love.

Anyway, lately I’ve been paying much more attention to the detestable characters — straightforwardly awful, shamefully pathetic, flat-out villainous or otherwise — on television, a medium where they’ve been given more than just a part-time role. Complicated or not, the ones lately have been mighty interesting, even if I’ve not been able to understand their motives:

2.   John Murphy & Meg Abbott (HBO’s The Leftovers): John Murphy (played by Kevin Carroll) —   resident firefighter and icy self-appointed in-charge of the mysteriously untouched (no Sudden Departures) Jarden, Texas — wasn’t introduced until season two. He’d served some time (well, if “some time” can constitute 6 years, 119 days) for the attempted murder of his father, Virgil. We could forgive a guy like Murphy, certainly (he’s a product of his own wretched upbringing), if it wasn’t for the fact that he works so very hard to keep the influx of immigrants to Jarden out and refuses to accept any sort of supernatural occurrences there to the point where he and his crew set the local handprint-reading oracle’s house ablaze, leaving the poor guy homeless. 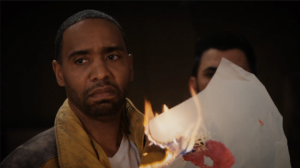 Meg Abbott (played by Liv Tyler) had her share of problems in season one. For one, the bizarro cult of the chain-smoking Guilty Remnant chose to stalk her into joining them just before her wedding. When she finally did, having taken part in some of their more deplorable schemes, she turns; something must’ve snapped. We’re not granted a whole lot of information (in the world of The Leftovers, where part of the world’s population has disappeared, this is the norm), but season two Meg is just monstrous. She rapes and tortures Tom Garvey, she terrorizes children on a schoolbus with a smile, she has an interloper stoned to death, and she’s planning something horrid upon Jarden, something that, undoubtedly, would even make the most hardened of the Guilty Remnant go pale. Liv Tyler is just superb as Monster Meg with her cold, flat gaze and half-cocked, little smirk. She’s downright chilling.

(The new Meg loves her some violence.)

3. Dodd Gerhardt (FX’s Fargo, season 2): Dodd (played by Jeffrey Donovan) is the eldest living child of the notorious Gerhardt clan in Fargo, ND. Dodd is a brute, choosing torture and murder as a method of keeping order within his family’s crime syndicate. He’s an absolute misogynist, too, treating his iron-lady mother, Floyd, with disdain and disrespect when she takes over the family business after papa Otto’s stroke. There’s enough darkness there as well that hints he might’ve even been the one responsible for turning his daughter, the doomed Simone, into the kind of girl who’d sleep with the family’s enemy to garner some revenge. At any rate, Dodd remains a dickwad right until the bitter end, calling his kidnapper, the ever-chipper-in-denial Peggy Blumquist, a “whore.” He pays for it, thank goodness, and it’s delicious.

4. Kilgrave (Netflix’s Jessica Jones): I’ve saved the nastiest for last here, and David Tennant as the mind-controlling Kilgrave is (unsurprisingly) fantastic, relishing the vileness of the character to the point where I don’t know if I ever want to see him play anything else ever again. Kilgrave is the perfect antithesis to the contemporary female superhero. As critics have pointedly noted, he is a representative of the worst kinds of men out there, victimizing everyone in his path to the point where, if they survive, they’ve trauma so severe that it changes them utterly, sometimes for the worse. When we’re first introduced to ex-superhero Jessica Jones (Krysten Ritter), she’s a hard-drinking private eye besieged by nightmares of the worst sort. Her PTSD, we later find out, was caused by Kilgrave’s manipulations. She’d suffered being not only his pretty, sexual plaything whom he raped and verbally abused, but she was also forced into being a killer for him as well. When Kilgrave and Jones finally have their showdown, it’s not as grand as it could’ve been, but it’s righteous when it finally happens.

(Kilgrave at work, locking children in the closet.)